A resin floor has numerous advantages over wood, carpet and concrete floors. Specific resin flooring products have specific features and depend on the product you choose to install; for instance, there are different levels of chemical resistance and slip resistance.

Additionally, features like resin skirting offer a curved finish on the junction between the floor and the wall preventing any dust, dirt, or bacteria building up. These features are essential in areas where hygiene is a priority like healthcare facilities, restaurants, or any other areas that handle foods or drinks.

Hospitals, doctors’ surgeries, and dental facilities are all required to conform to high hygiene standards which can be easily achieved and maintained through resin floors. This resin has been proven to withstand high levels of chemical resistance and is also easy to clean, sanitize, and maintain.

School flooring should prioritize in the safety of the floor surfaces due to the busy footfall in the facilities. 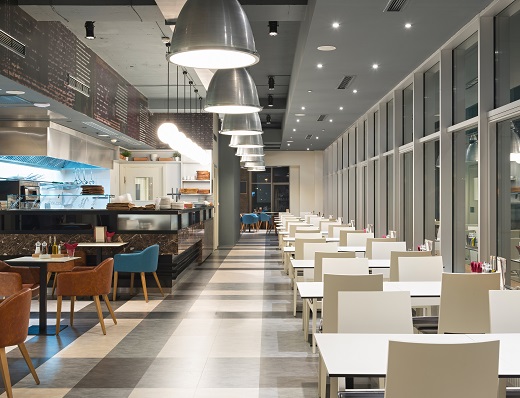 We have in-depth knowledge of resin flooring systems due to our long experience in the field, and we understand that floors of this nature should withstand a lot of traffic from people and heavy pieces of equipment.

Our resin floors are capable of withstanding non-stop traffic from pedestrians, heavy machinery, and harsh cleaning products or methods. There are some cleaning methods, ingredients, and equipment that are very aggressive on walls and floors, but we can also solve such problems.

Some places we have installed hygienic resin flooring systems

A project Active Resin Flooring installed in one of the secondary schools in South East London is an excellent example of a hygienic flake finish floor. The preferred the epoxy flooring system because of its durability, smoothness, and the decorative appearance of the resin floor. Different shades of white, black and grey were used to create the blend of flakes, however, from our decorative flooring page, you can see that there is an unlimited range of patterns and blends which you can utilize to customize your style/branding. This hygienic system is perfect in cases where there is a high number of pedestrian traffic because of the ease to clean, sanitize, and maintain the floors.

Another situation where hygienic resin system is essential is in the food and drinks factories, for instance, a bacon preparation facility. The resin floor laid in such a facility should be hygienic to ensure easy cleanability and sanitation. An anti-slip and durable floor ensure the safety of the staff and can the floor will consequently withstand the wear of pallet traffic and forklift. The resin colouring is a Salsa Red to match the companies branding/product.

From the examples, you can see that there are various blends and styles we can use to customize a resin floor that suits your needs. We can create a smooth finish with circular patterns for a professional beautician look, a patterned flake finish using several colour blends (with an option for glitters) or even a food factory floor that requires durable resin products and practical design to fit your brand. 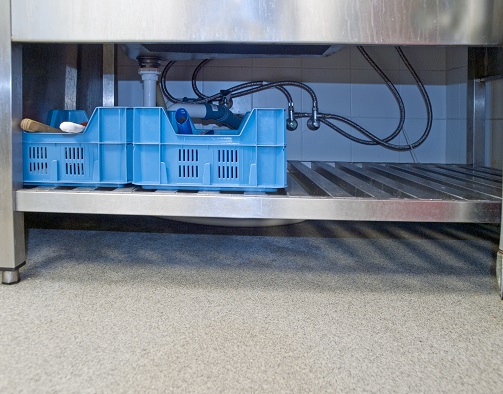 We guarantee to our clients that our flooring system solutions are of the highest standards. Our installations are therefore perfect for Food & Beverage Processing facilities, for Pharmaceutical, Warehousing, Industrial, schools & other environments which need to comply with modern safety and health standards. Additionally, we’ll always partner with you to develop a plan which will best meet your specific needs and schedule, before we install our customized flooring systems

As professional industrial flooring contractors nearby, we provide consultation services to help you choose the best indoor surfacing for your property. The epoxy material we utilize in our flooring system occurs in a wide range of colours, making it suitable for any design requirements. You can find these specialist materials through suppliers like Degafloor, Sika, and Flowcrete.

Contact Our Hygienic Resin Flooring Installers In Your Area

A resin flooring system is the best option when you are looking for a hygienic flooring installation. Active Resin Flooring is a specialist in installing hygienic resin flooring for various industries throughout the UK. Hygienic floors are installed as seamless systems, which makes them easy to clean. This is because no bacteria, dust, or dirt can be trapped between seams or gaps like with tiled floors. Also, resin floors are easy to disinfect and possess chemical resistance properties.

Active Resin Flooring usually installs self-levelling epoxy flooring up to a depth of 2-3 mm thick. After pouring out the resin mixture onto the desired floor, specialist equipment is used to spread the mixture to make sure there is an even coating throughout the area. We always do a thorough cleaning of the existing floor before any resin mixture is poured to ensure a smooth resin surface when the application is complete.

For a perfect self-levelling epoxy floor installation, whether in your warehouse, property, factory, organization or any other place in the UK, please don’t hesitate to contact us today

All our floor solutions are Ferfa approved for both quality and safety, and they can be applied for concrete refurbishment in existing commercial factories or workshops as a protective floor coating. Complete the contact form in our website with your details, and we will get back to you with advice on which durable resin surface will be most suitable for you, based on your needs and budget.

We are glad to discuss and give you more information about our designs, costs and installations process, so contact us today!

Active Resin Flooring offers Hygienic Flooring Services in London.
The Capital City of London, lies within England in Greater London.
London’s local attractions include Canary Wharf, Hatton Garden, Three Mills, and River Thames.
As a result of its location, a number of rivers and water ways inlcuding Kensington Canal, London River Services, and River Thames are found within London.
London’s governing local authority structure is a Devolution In The United Kingdom.
London is found in Greater London.
London is attributed to shire districts including Burnt Oak, Harrow, Isleworth, Kensal Green, and Abbey Wood.
London’s administrative wards and subdivisions also include Brentford, Barnes, Teddington, and Kew.
Capital City’s including London are split are representated parliamentary constituencies such as Paddington North (UK Parliament constituency), Westminster Abbey (UK Parliament constituency), Kensington and Chelsea (UK Parliament constituency), Westminster (UK Parliament constituency), and Battersea (UK Parliament constituency).
The Capital City of London additionally includes villages such as Arkley, and Harefield in its administrative area.
London contains a number of settlements including West Norwood, Raynes Park, Greenford, Adelphi, Bermondsey, Maida Vale, and East Barnet.
Active Resin Flooring’s Hygienic Flooring Services area in the Capital City of London also encompasses Brondesbury Park, Muswell Hill, Battersea, Dartmouth Park, and Greenwich
Other service areas of Active Resin Flooring within London, England include South Norwood, Cottenham Park, Brent Park, Gidea Park, and Hampstead,
in addition to London’s outer urban areas Barking, Lea Bridge, Hook, Eltham, and St Giles.
Last but not least Active Resin Flooring’s Hygienic Flooring Services cover the greater London area including Harlesden, Catford, Edgware, Chingford, and Shepherd’s Bush.
Within In London, Greater London you can find several small communities including South Hampstead, Putney, Shoreditch, Bexley, and Paddington.
In London you find towns like Pitshanger, Holloway, Woodside Park, Waterloo, and Romford.
Other towns found within the Capital City of London include Chipping Barnet, Barking, Westminster, Enfield Town, and Chinatown
Lister Institute of Preventive Medicine, and Institute of Cancer Research within London are known through out the England and the United Kingdom.
London has a number of schools in the area including London Oratory School, and The Hampshire School.
Furthering the education of London locals is the Carlyle’s House, and Saatchi Gallery.
St Luke’s Church, Newington Green, and Pollards Hill are popular with London citizens and known throughout England.
Essential roads and infasructure in London include Lillie Road, Angel, and Bishopsgate.
Unusual (and unique) places within London include Statue of Charles II, Royal Hospital Chelsea.
Situated in London, notable heritage assets include 15 Cheyne Walk, Royal Hospital Chelsea, Stamford Bridge (stadium), St Helier, and Sloane House.
Many churches are still located in London, St Mary’s, Church of Our Most Holy Redeemer and St Thomas More, and Chelsea Academy to name but a few.
The rich history of London includes Chelsea Harbour, Three Mills, Enfield Island Village, Timeline of London, and Sands End.
London’s main business centres are comprised of Canary Wharf.
The Capital City of London is home to a number of businesses including Rockstar London, Granny Takes a Trip, and Finborough Theatre.
London is a centre of commerce and shopping centers such as Granny Takes a Trip are famous.
Why not give us a call today