While custom-made resin floor coating colours are typically subject to minimum order quantities, practically any shade, whether as a standalone or colour mixture, is obtainable as a resin floor coating colour.  Thanks to the commercial sector’s design flexibility, creating a black-coloured self-levelling flooring system is possible. It is, however, normally subject to a specific order quantity. A black self-levelling or smoothing floor surface is durable, doesn’t wear quickly, is impact resistant, and easy to maintain and clean. Typically, the thickness level for laying a standard black resin floor is 2-4mm. 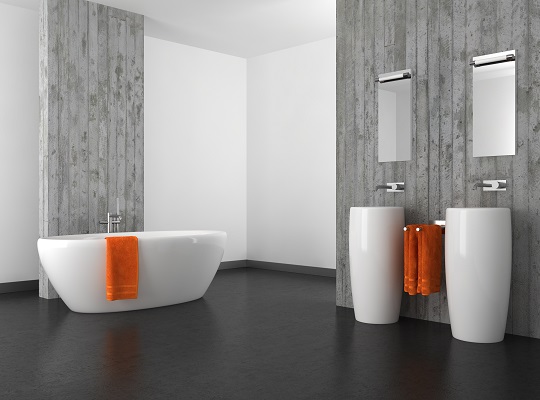 Black resin flooring systems are a preferred option for corporate establishments. Black flooring can aid brand reinforcement, be it a for playful interior or a more cosmopolitan-styled one.

Why Should Black Resin Flooring Be Your Choice?

Because of it’s serenading, modern-styled look black resin floors can be quite the show stopper. Not just that, black resin equally improves your home’s overall decor as it exudes a high-value appearance.

What Benefits Do You Get for Installing a Black Resin Floor?

Black is beautiful. It represents a bold colour statement that symbolizes mystery and composure. All you need is an appropriate matching décor to work with the black floor. Below, we outline some benefits of choosing a black-coloured resin floor:

Compared to lighter floor shades, you won’t have to worry about the presence of debris, dirt, and dust on your floor. With minimal effort, a black resin floor will always give off this clean, polished look in your home.

A black décor gives off this aura of modernisation. Pairing a black-coloured floor with a lighter shaded wall can introduce an unprecedented feeling of liveliness in a room. With black coloured resin flooring, you won’t need to spend heavily on furniture installation or renovation.

You only need to walk on a well maintained black floor once to feel the aura of sophistication it oozes. The reason isn’t far-fetched: black might look simple to the eyes, yet, it is big on making bold statements.

Ever wondered why there’s the famous saying among socialites that “you can never go wrong in black?” Think of the favourite colour for elements ranging from limousines to tuxedos and evening wears. It’s all black.

Compared to epoxy coatings, epoxy self-smoothing resins result in a higher-build finish when installed at a standard 2-mm thickness level. They are self-sealing with a bright gloss or matte finish, depending on your preference. Ideally, they are more suitable for dry process work areas with medium to heavy-duty truck, foot, forklift, and pallet traffic. Some benefits of epoxy self-smoothing resins are highlighted below:

To give a seamless and uniform look, they are typically finished with a pigmented matte sealer, in one or two coats. Unlike standard epoxy flooring systems, polyurethane sealers possess excellent UV resistance, a feature that’s not obtainable with conventional epoxy systems as they’re prone to colour change over time.

Also, Polyurethane self-smoothing resins are more comfortable and feel softer underfoot. Their installation goes well with a broad range of substrates including screed, concrete, moisture-resistant chipboards, and marine plywood. To ensure even greater comfort and upgraded acoustics, give our comfort flooring range a try. It integrates a 4mm thick rubber matting underlay.

Resin floors are scratch and stain-resistant. Thus, they tend to retain their brand-new look years after installation. Given their waterproof nature, they are suitable for liquid spill-prone areas like laundry rooms, kitchens, and bathrooms. Moreover, as long as they are dried routinely, they won’t rot, loosen, or warp.

They are Easily Maintained

You won’t need any exclusive cleaning product for your resin floors as long as you sweep and mop regularly.

Resin floors are a popular option among manufacturers because you get to have the best of both worlds: quality-looking and affordable floors.

All our poured resin floors are thoroughly tested and primed for effective and long-lasting results. Expect efficient and effective results when you choose any Resin Flooring flooring solution.

We deliver hand-cast, custom-made resin flooring, to some of the most alluring interiors throughout the world. From our offices in South East London we are your go-to specialists for resin flooring projects/