Are you on the hunt for the perfect flooring system for your Garden path, Patio or driveway? Is style, comfort and durability top on the list of what you require from your flooring system? Then look no further, a Resin bound flooring system is your all in one solution. Made from a mixture of resin and aggregate stones, Resin Bound paving produces a permeable, durable and incredibly polished finished. Making it the best flooring solution for Public or private Gardens.

Whether you are a  first time Garden owner or a  green-fingered gardening enthusiast looking to upgrade your Garden path or patio, Resin Flooring Resin Bound Flooring system will help you create the garden of your dreams.

Our Resin Bound flooring solutions come in a vast range of textures and colour and are versatile. Making it the perfect garden paving solution for all types of garden styles.

Why A Resin Flooring Resin Patio?

A lot of people trust Resin Flooring for their Resin-bound paving solutions and you should too! Here’s why:

Our Resin Bound paving solutions are SUD compliant. This means you will not have to worry about water puddles, loose stones or weeds.

Resin-bound paving is our speciality

We have been in the business of installing Resin bound pathway, patios, driveways and pool surround for clients from all over the world, since the year 2019. We guarantee industry-grade quality finishes every time.

We Offer A Broad Selection Of Textures And Colours

Whatever your garden style might be, Formal, the Mediterranean, Prairie and Meadow, Traditional, Japanese, Gravel and Rock or Informal and Cottage, you will always be able to find a colour scheme or texture scheme from our vast range of options.

Long-lasting And Easy To Clean

Our finished Resin Bound paths or patios only require the occasional power wash or sweep to keep it looking great.

Resin Paths With A Difference

We believe every Garden is unique. The different parts of your Garden serve different purposes and we take that into consideration when we are designing your patios or paths. Below are some product  suggestions:

This product produces a soft porous finish and is ideal for pathways or patios that require a soft feel. It is often the go-to choice for school recess areas and golf paths. What makes this product a great option for environments such as these are its anti-slip, absorbent properties.

This is a PU coated stone that is often combined with a UV stable polyurethane binder to produce a colourfast, textured but seamless finish. Often used in

Every detail counts when it comes to designing gardens. Wouldn’t it great to be able to display a flawlessly sculpted driveway and weed-free garden paths every time friends come by? Wouldn’t It be better if you could achieve this without having to spend hours pressure washing or weeding your stone surfaces? Resin Flooring specialises in the installation of Garden paths and patios that are seamless(so you don’t have to worry about weeds), high quality, long-lasting and incredibly beautiful. 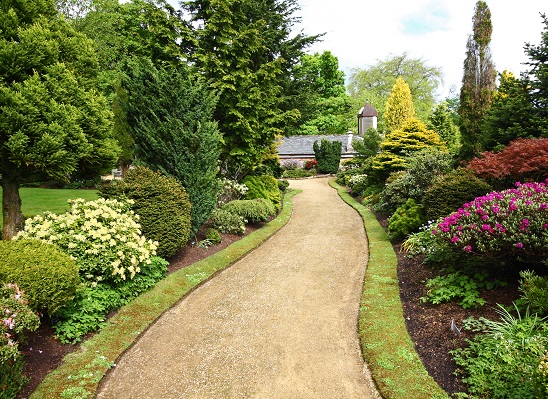 We don’t just do patios, we are also experts in the installation of Resin Bound swimming pool surrounds, driveways, balconies, kitchen, living room, office and even playground floors!

Please contact our team on 0208 6140774 for a free quote or if you would like further information on our fantastic array of garden resin flooring products.