What is kitchen resin flooring?

Resin flooring is a distinctive flooring solution with a wide range of benefits over standard flooring options. Resin floors are usually very attractive and you can choose from a vast range of colours and practical finishes such as a clear seal coat or a matt finish or even a slip-on finish for your kitchen.

Resin is also durable and can handle challenges such as chemicals, UV light, mechanical loads and many more. Resin floors can look great, as well as being highly functional for your kitchen. 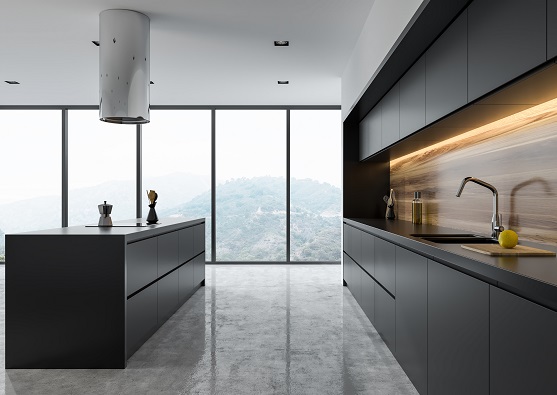 What’s the perfect flooring choice for the kitchen?

While it is true that virtualy any floor type can be used in a kitchen, opting for resin flooring in your kitchen affords you a number of benefits. These benefits such as moisture and oil resistance, anti-slip, and anti-scratch cannot be achieved with most regular flooring options.

A very common option in kitchens is micro-cement. With micro-cement, you have a kitchen floor that has a distinctive design, industrial strength and a floor that is very forgiving in terms of its cleanliness. There are various ranges of colours,with grey seeming to be the colours of choice for homeowners at the moment.

Stonex Sand is a good substrate when combined with an epoxy. These floors offer an infinite selection of colours and are very decorative. Comfort floors, sometimes called liquid vinyl, are also a common option. They are colourful polyurethane floors that give the floors a very sterile, modern look.

It Creates a Comfortable Kitchen

Your kitchen is the core of the house, and it should be comfortable. Our coated resin floors are warm and smooth underneath your feet, completely comfortable even without underfloor heating. In addition, we make use of biopolymers materials, which makes it difficult for your kitchen floor to show scratch or skid marks.

Our resin based kitchen floors are also much better for the home than concrete and epoxy resin. Unlike the petrochemicals used in epoxy resin or the energy-intensive cement found in polished concrete, the resin floor is made from a viable, natural component that makes our floors safe for the environment and for you.

The surfaces of the house have to be cleaned and maintained easily, and no room in the house is quite as busy with the footfalls, regular activity and chaos as the kitchen, a place that demands even more cleaning. When youis resin based, the kitchen floor is waterproof, meaning that it can be washed down rapidly when needed without the water damaging the floor and other resin bound surfaces.

With a lifespan of over 20 years, the kitchen resin floor is extremely long-lasting and ideal for the activities in a family.

Why Should You Go With Us?

Our installation team is very qualified, and a Resin Flooring Association (FeRFA) Certified Member. For many years, we have collaborated with hundreds of housing and business initiatives across London and the UK–rest assured that you trusted the professionals with your resin floor surfaces.

We also give a distinctive colours matching service, so you can choose from one of our colours collections or have full liberty to choose the colourss you like. Finally, we are expert finishers in resin, polished concrete and floor terrazzo. Our floor designs take the environment into consideration, so you will be getting an eco–friendly, sustainable floor in your kitchen.

One of our most common requirements is stylish, yet convenient floors that combine kitchens and dining areas, and we have successfully satisfied countless number of homeowners with a seamless design.

If you are thinking of upgrading your kitchen floor to a resin based floor, please use the contact form on this website to reach us quickly.

We give a free quote service and will advise you on your home’s finest flooring alternative. We give excellent products at affordable rates and can give you flooring project preparation services. We will be pleased to serve you and to provide you with the experience you deserve, so please plan a trip to our showroom.

What is the price of a resin floor?
There are many factors that need to be taken into account to provide accurate costs, such as the surface that the resin floor coating must be covered, whether it needs priming, what flooring system you want, the number of coverings it may need. you can request a free quote by calling 01245 678920. Contact us today for that much needed kitchen upgrade.
What item is best for my floor?
You will need to talk with our specialists on the specific area or resin characteristic you require. These include anti-slip flooring, anti-static flooring, demarcation and line marking, metallic flooring, decorative flooring and floor joints, polyaspartic flooring, and hygienic flooring.
What is flooring anti-slip?
The textured finish of this type of flooring helps maintain a level of control underneath the foot. Depending on demand, the grip level can be changed.
Does my kitchen require chemical resistant floors?
The sort of flooring you need depends on what is currently on your floor and your unique flooring requirements.
How much time is required for the installation?
This depends on the complexity and size of the project, but a typical setup takes between 2 and 5 days to install and cure..